Installation of Office Bearers is one of the major events in a Rotary year. Usually an august gathering with a lot of excitement, this function is attended by a large number of guests and Rotarians from other clubs, followed by fellowship and a sumptuous dinner. The ceremony of handing over the charge from one board to another is an event to be cherished by the incoming President and his team for a very long time. This time around however, it was unusually different but exciting nonetheless. Owing to the ongoing COVID-19 pandemic, the entire ceremony had to be conducted virtually. President Rtn. Archibald Menezes and his team did a stupendous job in pulling it off. It was meticulously planned and well executed by his team.

The meeting started precisely at 6:00 PM on Zoom platform. President Elect Rtn. Sudhir Jalan collared President Rtn. Jathin Attavar and soon after, the meeting was called to order with an Invocation by Rtn. Dr. Arjun Nayak followed by welcoming of the gathering by President Rtn. Jathin Attavar. The bound volume of Rotalore was released by Assistant Governor Rtn. Ekanath Dandekeri. Outgoing President Rtn. Jathin Attavar gave a nostalgic farewell speech wherein he mentioned some of the major projects completed during his tenure. He also informed the members that the Global Grant Application for “The Mobile Health Screening Project” was sanctioned by the Rotary Foundation. It will be one of the biggest projects of our club as well as our district. After that, the responsibilities of the Board of Directors were handed over to the new team and the Pin, Collar and Gavel were received by Incoming President Rtn. Archibald Menezes. President Rtn. Archibald then gave his acceptance speech wherein a sneak peek was given into his plans for the year. He then wished members celebrating their birthdays during the week. A minute’s silence was called in remembrance of PDG Rtn. Surya Prakash Bhat. The Assistant Governor Rtn. Ekanath Dandekeri handed over the pin to President Rtn. Archibald Menezes on becoming PHF+6 level. He recalled the generous contribution by Rtn. PP. PHF Prakash Kalbhavi and Rtn. PHF Abdul Karim Adka who became Major Donors by contributing to The Rotary Foundation during the Rotary year 2019-20. Members of our club who have taken up District roles were recognised and congratulated. President formally welcomed The Guest of Honour Assistant Governor Rtn. Ekanath Dandekeri with a floral bouquet and was introduced by Vice President Rtn. P.K Kiron. Rtn. Dandekeri spoke on various important Rotary projects and emphasised that sanitisation and water conservation projects should be taken up on priority by the clubs. He also requested member to practice Yoga for better health.

President Rtn. Archibald Menezes introduced the Board of Director and thanked them for accepting the responsibilities.

The Chief Guest Dr. P. Subrahmanya Yadapadithaya was introduced by President Elect Rtn. Sudhir Jalan. Dr. Subrahmanya spoke eloquently on various topics of current affairs and also on the ongoing pandemic. He said that this pandemic has opened new opportunities in various fields and it is going to be a new normal. Post pandemic organisation like Rotary which hasa large network will help businesses to get back to normalcy. He also said that he was very impressed with the Rotary’s 4 way test.

Ann. Neeta Kamath brought best wishes on behalf of Ann’s Club. She said that as the fear of the pandemic engulfed the world, the silver lining has been that organisations like Rotary are doing their bit to serve the humanity. She also said that outgoing President Rtn. Jathin Attavar and his team have done an admirable job under all avenues of service.

The Vote of Thanks was rendered by Secretary Rtn. Vishal Mallya and the meeting was adjourned for National Anthem. 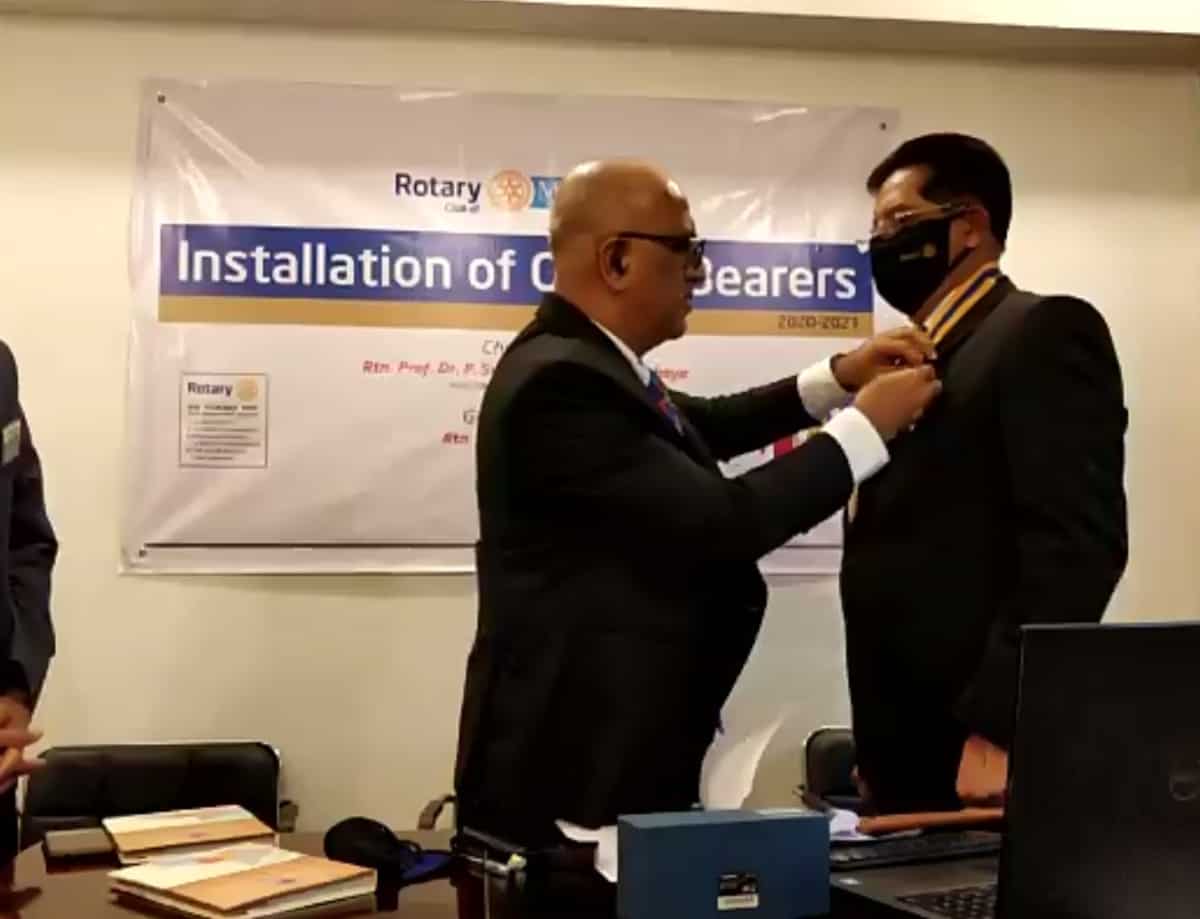 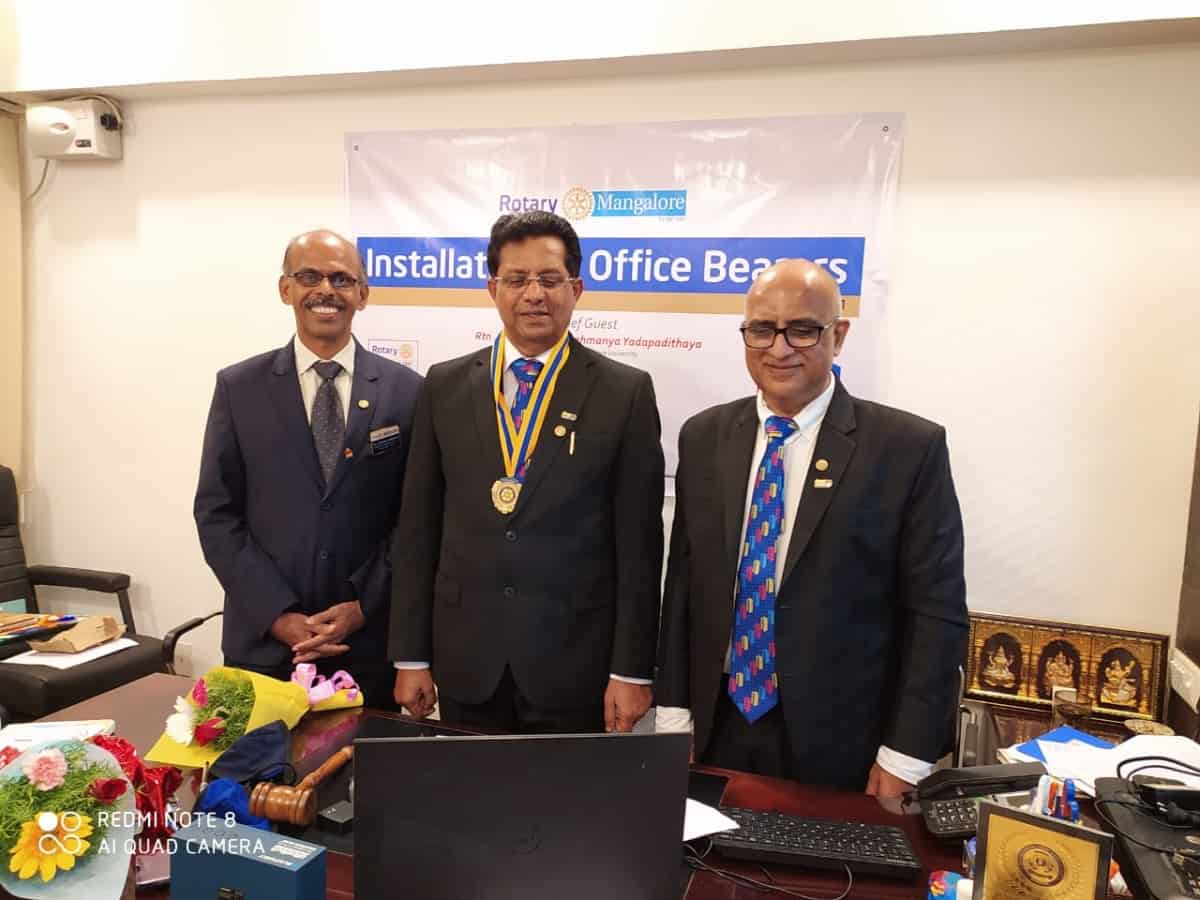 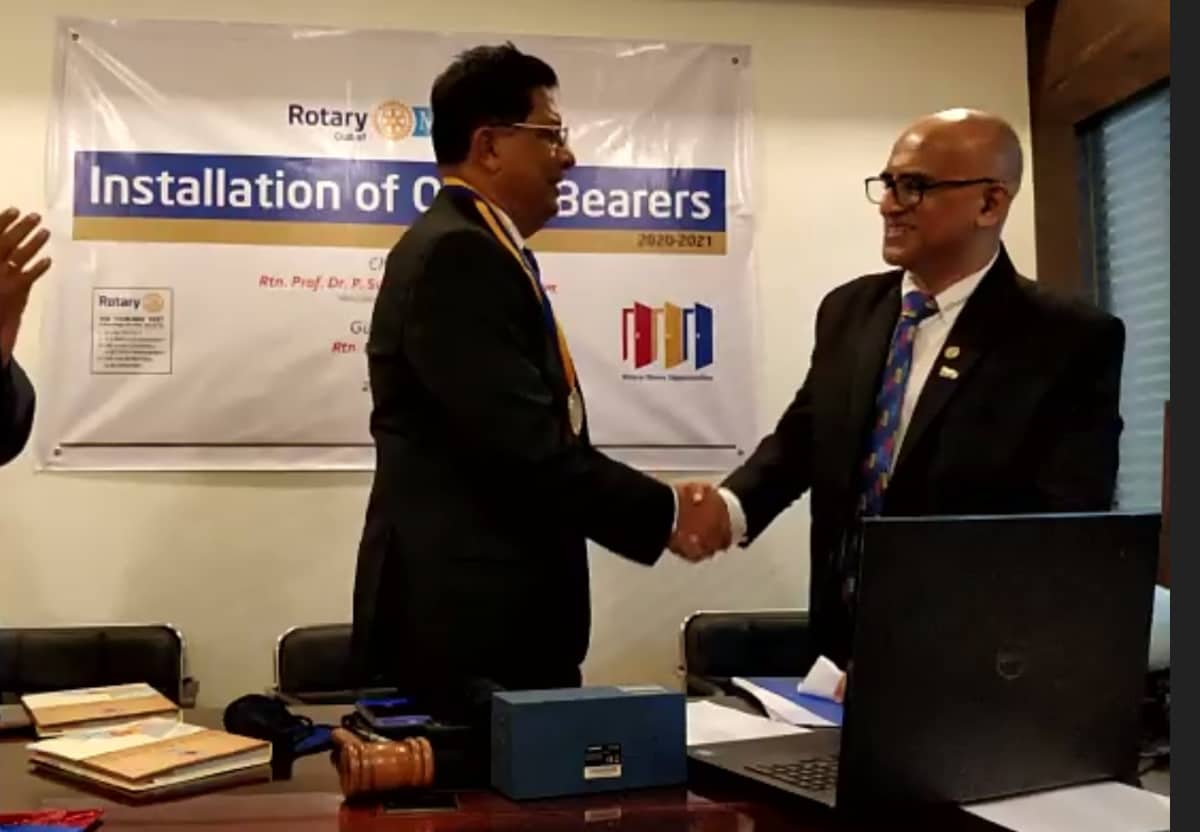